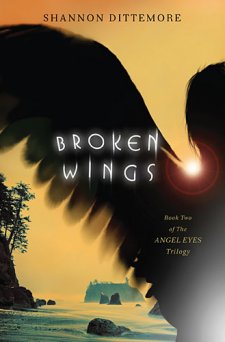 About Broken Wings: Book Two in the Angel Eyes Series

Angels with wings of blade. Demons with renewed sight. And a girl who has never been more broken.

Brielle has begun to see the world as it really is, a place where angels intermingle with humans. But just when she thinks sheâ€™s got things under control, the life sheâ€™s pieced together begins to crumble.

Her boyfriend, Jake, is keeping something from her. Something important.

And her overprotective father has turned downright hostile toward Jake. Brielle fears sheâ€™ll have to choose between the man whoâ€™s always loved her and the one whoâ€™s captured her heart.

Then she unearths the truth about her motherâ€™s death and the nightmare starts. Brielle begins seeing visions of mysterious and horrible things.

What she doesnâ€™t know is that sheâ€™s been targeted. The Prince of Darkness himself has heard of the boy with healing in his hands and of the girl who saw through the Terrestrial veil. When he pulls the demon Damien from the fiery chasm and sends him back to Earth with new eyes, the stage is set for the ultimate battle of good versus evil.

Brielle has no choice. She must master the weapons sheâ€™s been given. She must fight.

But can she fly with broken wings?

Shannon is a wife and mother. A sister. A daughter. A friend. She was raised in Northern California by her parentsâ€”pastors of their local church and constant figures of inspiration.

â€œIâ€™m a firm believer that books open doors into the imagination and remind us that we should venture there often. We should dream. We should try hard things. We should be fearless. And while there are many obstacles that stand in the way, I hope my stories remind readers that life is to be lived. Pain is to be tackled. Mountains are to be climbed. And while you may fall into dark places along the way, light is as close as the prayer on your lips.â€

You can read more about Shannon at her website and blog at: http://shannondittemore.com/

I loved Angel Eyes: Book One in the Series.Â  You can read my full review here.Â  Here’s a quote from my review:

The thing that I appreciated most about Angel Eyes was that while the book was full of suspense and pain and conflict in the heavenly realms, it was not built on fear and horror, but on hope.

When I read the synopsis for Broken Wings (above) it sounded dark, but like Angel Eyes, I found this book packed full of hope.Â  In fact, I’m not sure I’ve read anything else recently that has stirred my heart like this series.Â  The battle is real.Â  The battle is present.Â  Worship, love, truth, the testimony of our redemption and faith in the Triune God are our weapons.

I’ve read other books that center around angels and demons.Â  Many of them left me uncomfortable.Â  There was too little of God, too much supposition and too little Biblical foundation.Â  While this series is imagination and fantasy, it is built on a foundation of truth.Â  Always the angels worship and honor God as primary.Â  Even the gifts given by the halo are attributed not to the halo itself or to the angel it came from, but always as a blessing from the Almighty who alone chooses what gifts to give and to upon whom He will bestow these graces.Â  I also liked that the author incorporated the truth that God gives people roles to play as acts of worship, despite the fact that an angel could have played that part.

Further, I was moved by descriptions of worship in color and song and fragrance.Â  The author’s beautiful illustrations captured my heart and stirred my imagination.

While this could be read as a stand alone novel you really should read Angel Eyes (which is currently on sale for just $4.00 at Amazon) before reading Broken Wings.Â  I’m looking forward to reading the next installment, Dark Halo, due to be released on August 20th.