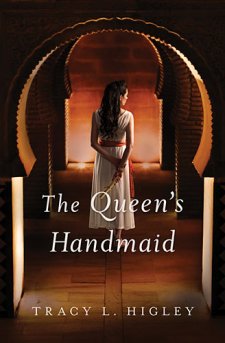 From the servant halls of Cleopatra’s Egyptian palace to the courts of Herod the Great, Lydia will serve two queens to see prophecy fulfilled.

Orphaned at birth, Lydia was raised as a servant in Cleopatra’s palace, working hard to please while keeping everyone at arm’s length. She’s been rejected and left with a broken heart too many times in her short life.

But then her dying mentor entrusts her with secret writings of the prophet Daniel and charges her to deliver this vital information to those watching for the promised King of Israel. Lydia must leave the nearest thing she’s had to family and flee to Jerusalem. Once in the Holy City, she attaches herself to the newly appointed king, Herod the Great, as handmaid to Queen Mariamme.

Trapped among the scheming women of Herod’s political family-his sister, his wife, and their mothers-and forced to serve in the palace to protect her treasure, Lydia must deliver the scrolls before dark forces warring against the truth destroy all hope of the coming Messiah.

Tracy Higley writes novels that I simply can not put down and The Queen’s Handmaid was no exception.

Not only was the plot interesting and the characters well developed, but the history was masterfully presented.Â  The complexity of the era, the wars and rulers and murder and intrigue have always left me baffled when reading through the history books and yet this novel seemed to bring it all to life.Â  I could see the ruthlessness of Cleopatra’s palace and taste the agony at Masada and feel the press of the rioting in Jerusalem.Â  From Herod’s madness to Mariamme’s despair I lived the history.

And then through this history I also lived a mystery.Â  What if there were scrolls that faithful Jews had been guarding and others had been looking for over centuries of time?Â  And what if this was the moment when their secrets were to be brought to life?Â  What if God chose one simple handmaid and brought her into the palace and the family of the queen so that she could play a part in preparing the way for the Messiah?

This book was fabulous on so many levels.Â  Drama, suspense, spiritual battle, the discovery and growth of faith, the presentation of true love amid a culture where marriage (and sex and offspring) were leverage in a political game and the ever present hand of the One True God bringing about His plan for redemption threading through the midst of it all.Â  I recommend this novel.