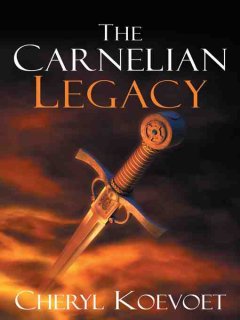 Marisa MacCallum always believed the man of her dreams was out there somewhere. The problem isâ€”heâ€™s in a parallel universe.

After the death of her father, eighteen-year-old Marisaâ€™s life is on the verge of imploding. With nowhere else to turn, she seeks comfort on her daily ride in the woods of Gold Hill. But when a mysterious lightning storm suddenly strikes, Marisa is hurled into the ancient alternate dimension of Carnelia where she meets the arrogant but attractive nobleman, Darian Fiore. With no hope of returning home on her own, Marisa has no other choice but to join Darian on a risky mission to negotiate peace with his cousin and archenemy, Savino da Roca.

As she struggles to survive a world teeming with monsters, maniacs and medieval knights, Marisa sees a softer side of Darian and begins to fall in love. But when she discovers he is locked into an arranged marriage, her heart shatters. After Savino falls for her charms and demands her hand in exchange for peace, Marisa is faced with an impossible choice: marry the enemy of the man she loves or betray them both and become the catalyst for a bloody war.

While I generally hesitate to read an author’s debut novel, I found The Carnelian Legacy a fair balance between skill and imagination.Â  The novel did not draw me in to the point where I became the character, yet it did keep my attention.Â  While the story’s twists could be predicted, I still enjoyed watching them unfold.

I have stated before that I am uncomfortable with the increase in suggestive writing within the “Christian” marketplace, particularly in novels marketed toward teens, and that tension followed me into this book.Â  Though it was only the smallest portion of this book and while never explicit, the novel did include suggestive situations could have been toned down or removed altogether without affecting the plot.Â  I am a firm believer that a skilled author can clearly portray the difference between love and lust without muddying the waters with scenes where desire and sexuality are presented without discernment. For example, there was no reason that the author should have described the revealing nature of the character’s nightgown and her lack of a robe just before she opened the door to allow a male character into her room.Â  It was not necessary to the scene: they talked, he left and we are left holding the book wondering why we needed to know that she wasn’t appropriately clothed and what we are to make of her moral character when there is no sense of censure for these actions.Â  Though a piece of the plot is that the characters find each other attractive, in my opinion there are more appropriate ways of communicating this truth than the events that the author chose to include in this tale.

Still, if you are a fan of fantasy romance novels you may enjoy the plot, world building and adventure in this beauty from ashes story. 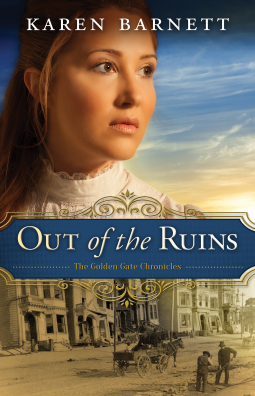 Out of the Ruins

While her sister lies on her deathbed, Abby Fischer prays for a miracle. What Abby doesnâ€™t expect, however, is for Godâ€™s answer to come in the form of the handsome Dr. Robert King, whose experimental treatment is risky at best.Â  As they work together toward a cure, Abbyâ€™s feelings for Robert become hopelessly entangled.

Separated by the tragedy of the mighty San Francisco earthquake, their relationship suddenly takes a back seat to survival. With fires raging throughout the city, Abby fears for her life as she flees alone through burning streets. Where is God now? Will Robert find Abby, even as the world burns around them? Or has their love fallen with the ruins of the city?

First, I found this novel to be a bit disjointed, almost as if it was meant to be two separate stories (two varied circumstances) that were meshed into one book.Â  The first 55% of the book is about cancer and early x-ray treatment.Â  If you are fond of medical novels (which I am not) you may really enjoy this look into the development of early medical technology.Â  During this first portion of the book there were relational elements, but they took a back seat to other theme and plot developments.Â  Then the book shifted to a period of grief over tragic circumstances, while the later portions of the book moved into a rapid-fire exploration of a few main characters in the midst of the earthquake and subsequent fires, wrapping up the questions of faith in this final, brief series of events.

Based on the above ‘About the Book” promotional synopsis I thought I was going to be reading a romance set during the circumstances of the San Francisco earthquake.Â  Instead I found myself reading a book with a strong medical setting on how to relate to God in tragic circumstances.

If your expectations are to read a book about relating to God in the midst of tragedy then you might really enjoy this novel.Â  It is well written.Â  The theme of relating to God in tragedy is richly developed and the characters have depth.Â  I’d recommend the book based on the theme, rather than as a historical romance.

I received a free digital copy of this novel from Abingdon Press in exchange for my honest opinion.