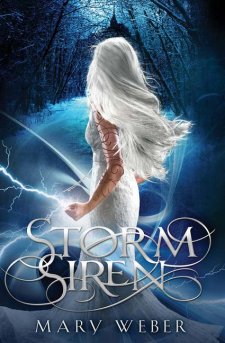 “I raise my chin as the buyers stare. Yes. Look. You donâ€™t want me. Because, eventually, accidentally, I will destroy you.”

In a world at war, a slave girlâ€™s lethal curse could become one kingdomâ€™s weapon of salvation. If the curseâ€”and the girlâ€”can be controlled.

As a slave in the war-weary kingdom of Faelen, seventeen-year-old Nym isnâ€™t merely devoid of rights, her Elemental kind are only born male and always killed at birthâ€”meaning, she shouldnâ€™t even exist.

Standing on the auction block beneath smoke-drenched mountains, Nym faces her fifteenth sell. But when her hood is removed and her storm-summoning killing curse revealed, Nym is snatched up by a court advisor and given a choice: be trained as the weapon Faelen needs to win the war, or be killed.

Choosing the former, Nym is unleashed into a world of politics, bizarre parties, and rumors of an evil more sinister than sheâ€™s being prepared to fight . . . not to mention the handsome trainer whose dark secrets lie behind a mysterious ability to calm every lightning strike she summons.

But what if she doesnâ€™t want to be the weapon theyâ€™ve all been waiting for?

Set in a beautifully eclectic world of suspicion, super abilities, and monsters, Storm Siren is a story of power. And whoever controls that power will win.

Storm Siren portrays a fascinating world caught up in the midst of war.Â  The descriptive writing and creative storytelling keeps the reader engaged.Â  The characters’ lives display multiple layers and depth of thought in their creation.Â  I found the novel more violent and bloody than what I would normally choose to read (without crossing the line into the realm of horror), yet I would not recommend this book to sensitive readers.Â  I might have actually preferred this story as a movie rather than as a novel.

All in all, Storm Siren was an engaging, well written fantasy novel, on the violent side, but layered with in-depth characters, an interesting story line and a cliff hanger ending.