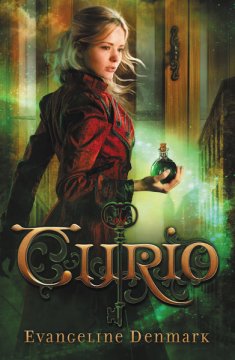 In this steampunk-flavored YA novel by Evangeline Denmark, Grey has a secret the Chemists who rule her town can never know.

Grey Haward has always detested the Chemists, the magicians-come-scientists who rule her small western town. But she has always followed the rules, taking the potion the Chemists ration out that helps the townâ€™s people survive. A potion that Grey suspects sheâ€”like her grandfather and fatherâ€”may not actually need.

By working at her grandfatherâ€™s repair shop, sorting the small gears and dusting the curio cabinet inside, Grey has tried to stay unnoticedâ€”or as unnoticed as a tall, strong girl can in a town of diminutive, underdeveloped citizens. Then her best friend, Whit, is caught by the Chemistsâ€™ enforcers after trying to protect Grey one night, and after seeing the extent of his punishment, suddenly taking risks seems the only decision she can make.

But with the risk comes the reality that the Chemists know her familyâ€™s secret, and the Chemists soon decide to use her for their own purposes. Panicked, Grey retreats to the only safe place she knowsâ€”her grandfatherâ€™s shop. There, however, a larger secret confronts her when her touch unlocks the old curio cabinet in the corner and reveals a world where porcelain and clockwork people are real. There, she could find the key that may save Whitâ€™s life and also end the Chemistsâ€™ dark rule forever.

Books published under the Blink imprint are intended for a general readership without being overtly Christian.

My Thoughts: (One spoiler)

I really wanted to love this book, but I honestly can’t recommend it.

To start off it was full of descriptive writing that really did help me “see” the worlds that were being described.Â  And it was full of creativity.Â  If I’d talked to you after the first couple of chapters I would have told you how interesting I found the world building and story development.

That said, as the story continued to unfold I had a bit of trouble connecting to the characters and the bouncing between the worlds of Mercury and Curio City illustrated how little I cared for the world or events of Curio, which is a large part of the book.Â  It was only the jumps back to Mercury that kept me at all engaged.Â  It simply felt like I was reading two novels at once.

I might have been able to see past the two story lines and credit it to the development of a new author if the content hadn’t gotten so dark.Â  And yes, I realize steam punk usually carries some sort of dark element.Â  In this novel the the darker elements of the story played on strong sexual themes and the sexual content is the reason that I can’t recommend this novel.

This book was sent to me by the publisher for review under the label of “Children’s Literature.”Â  Amazon lists it under the category of Teen which is a more appropriate label.Â  It’s not that I think that young adults are naive and I do understand that if you want to mirror the opposite of a love that cherishes and protects you would describe a false “love” that wants to devour and possess, but (spoiler coming) I don’t really think that young people need to be reading a descriptive, almost rape scene.Â  I certainly didn’t need to read it.Â  The image of a man crazed by blood is disturbing enough and could have carried the plot without the sexual elements, which go far beyond this one long, drawn out scene.

I do think Evangeline Denmark has a gift for writing, however I would like to see her grow in discernment, particularly when writing for a younger audience.

Also, while BLINK books are not meant to be overtly Christian, the only thing in this book that even hinted in that direction was the theistic idea of a maker.Â  In fact, there was a stronger theme eastern religion and the idea of good as a balance to evil (Defender as a balance to Chemist) than there was of any Christian theme, with the possible exception of the yet to be developed centrality of blood to the story.

I received a digital galley of the book for review in exchange for my honest opinion.