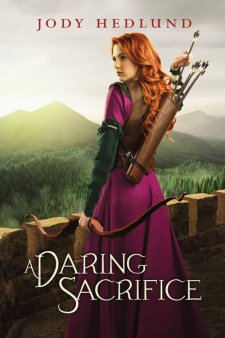 In a reverse twist on the Robin Hood story, a young medieval maiden stands up for the rights of the mistreated, stealing from the rich to give to the poor. All the while, she fights against her cruel uncle who has taken over the land that is rightfully hers. Forced to live in the woods and hide with the poor people she’s grown to love, she works to save and protect them, but she never anticipates falling in love with the wealthy knight who represents all she’s come to despise.

I decided to try A Daring Sacrifice, even after reading Dauntless, because it was written by Jody Hedlund and I was curious how her writing would cross over for the teen market. And I loved the cover image!

A Daring Sacrifice was a quick, easy and engaging read.

The novel balanced a genuine physical and emotional attraction between characters while keeping the content clean.Â  In fact, I really appreciated the thoughtful discussion questions at the end of the book, which would be great for a teen book group.

The other thing that I appreciated was that while there was a truly evil villain, the story didn’t focus on evil so that the villainy became a background to plot rather than a central focus.

Overall, I found it to be an entertaining love story that both teens and adults would enjoy.