Book Review: A Most Noble Heir

Book Review: A Most Noble Heir 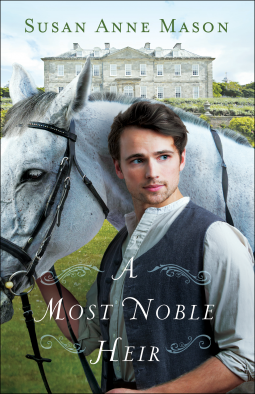 When stable hand Nolan Price learns from his dying mother that he is actually the son of the Earl of Stainsby, his plans for a future with kitchen maid Hannah Burnham are shattered. Once he is officially acknowledged as the earl’s heir, Nolan will be forbidden to marry beneath his station.

Unwilling to give up the girl he loves, he devises a plan to elope–believing that once their marriage is sanctioned by God, Lord Stainsby will be forced to accept their union. However, as Nolan struggles to learn the ways of the aristocracy, he finds himself caught between pleasing Hannah and living up to his father’s demanding expectations.

At every turn, forces work to keep the couple apart, and a solution to remain together seems further and further away. With Nolan’s new life pulling him irrevocably away from the woman he loves, it seems only a miracle will bring them back together.

A Most Noble Heir was one of those books that fell right in the middle for me, I didn’t love it, but there was nothing that I particularly disliked about it either.Â  It’s a good and well thought through story with believable characters.Â  There are numerous twists and turns in the plot and like Nolan you wonder if he will get his happily ever after with Hannah.

I think that the reason I didn’t love the book was the way the story progressed over such a long period of time with a fair amount of detail and a rather slow pace.Â  I felt more like I was watching a mini-series than living inside of a story. Â  While, on occasion I can find it annoying to read a book where the author draws me into every new chapter and I can’t find a place in the story to set the book down, this book was a little too easy to set aside in the middle of the story.

So if you are looking to do some casual reading with a book that you can pick up and enjoy and put down as needed without any compulsion to stay up until 2 am reading then this might be the story for you.

I received a free digital galley of this book in exchange for my honest opinion.