Photography Resolution: The Raven and The Ring

Photography Resolution: The Raven and The Ring

The Legend of the Raven and the Ring has several variations.Â  You can read a couple of versions of the myth below. Â  This photo was taken on a rainy day last summer from Buda Castle looking back toward Matthias Church. 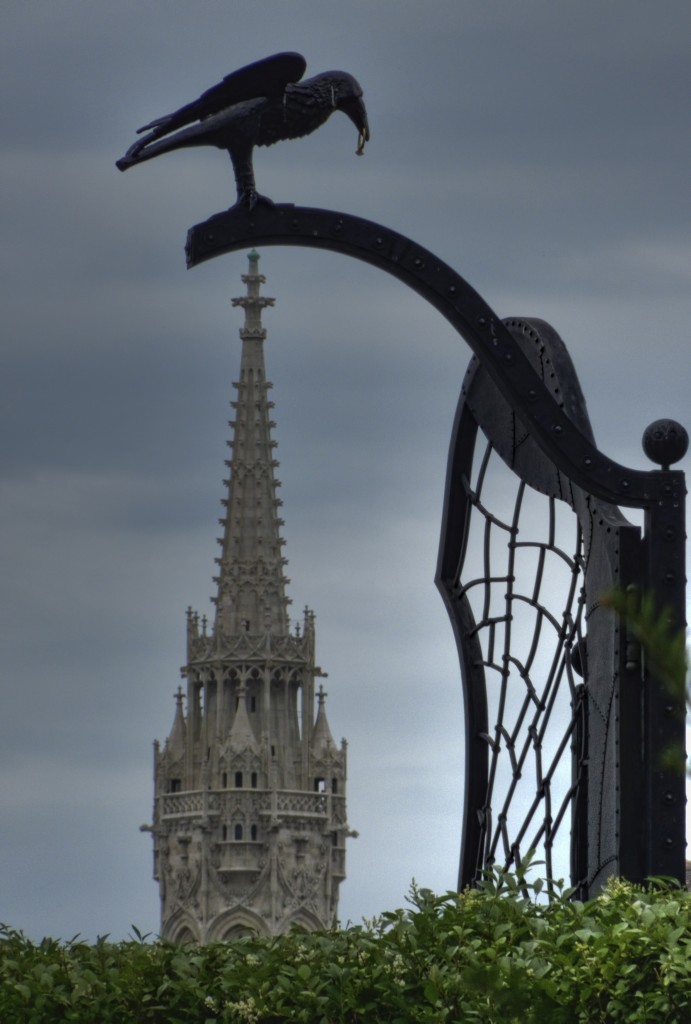 The epithet Corvinus, adopted by Matthias, originated from the Coat of Arms of the family which showed a raven (corvus in Latin).Â  The Silesian Annals state that when a raven carried off a ring King Matthias had removed from his finger, Matthias chased the bird down and slew him, retrieving the ring, and in commemoration of this event he took the raven as a symbol for his signet sign. Others think that the Coat of Arms was derived from another property of the family, Ravenâ€™s Rock (HollÃ³kÅ‘ in Hungarian).

Another legend says that when young Matthias was in prison in Prague his mother was able to send him a letter with a raven (and that’s why the Hungarian Postal Service had a raven as its symbol for more than a century).

On the coat of arm of the Corvin family is carved a raven with a golden ring in its beak. This family symbol has a legend. It is said that Ioan was the illegitimate son of king Sigismund of Hungary and his mother was Elisabeta. In order not to dishonor her, the king married Elisabeta to one of his knights, Voicu. Sigismund also gave her a ring, as a gift for the unborn child, which will help him to be recognized when he would go to the royal court.

During a trip of the family, when they halted for lunch, the ring was forgotten on a side of the towel were the food was placed. A raven, attracted by the shining of the ring stole it. Ioan of Hunedoara takes a bow, strokes the raven down and gets his ring back. When Ioan grew up and got to the royal court, he tells this story.Â  The king, impressed by it, decides that the familyâ€™s symbol shall be the raven with a golden ring in its beak.