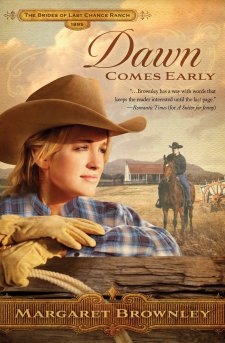 Looking for hardworking, professional woman of good character and pleasant disposition willing to learn the ranching business in Arizona Territory.Â  Must be single and prepared to remain so now and forevermore.

Disgraced dime novelist Kate Tenney fled the city that banned her latest novel for the emptiness of the desert. Answering an ad to be â€œheiressâ€ to a vast cattle ranch in the Arizona Territory, Kate hopes ranching turns out to be as romantic as she portrayed it in her novels.

But what awaits her is a life harder than the one she just left. There is no room for mistakes on a working cattle ranch, and Kate is ill-prepared for her new life. She quickly learns that dawn comes early. But she is tenacious.

Having been abandoned by a string of men, Kate has no intention of ever marrying. But she didnâ€™t expect to meet Luke Adams, either. Luke awakens feelings inside Kate she doesnâ€™t recognize, and his steady presence is a constant distraction. She has only written about love in the past, never known it herself. But her feelings for Luke stand in the way of all she has to gain if she is chosen as the heir.

Join Kate on a journey of discovery as a new dawn rises in her heart.

The advertisement at the beginning of the book interested me, but if I’d had to make a decision to buy this book after reading just the first chapter I wouldn’t have made the purchase.Â Â  Dawn Comes Early started out with characters I couldn’t particularly relate to and a bit of sensationalism.Â  I’m happy to say, however, that it got better and better as the story and characters developed.Â  I didn’t really care for Miss Tenney at the beginning of the novel, but I was rooting for her by the end.Â  Why?Â  Because I got to see a glimpse of her heart.

In the beginning of the story Kate didn’t know herself at all.Â  Her perspective was distorted and her actions seemed contradictory.Â  But as the novel progressed she confronted her past and discovered that she could face life “with the grace of a woman instead of the grief of a child.”Â  Her journey carried aspects of every man’s journey and that drew me into the narrative to the point where I can say that I enjoyed this novel much more than I expected I would after reading the first chapter. I also liked a number of the supporting characters and the book had its share of enjoyable laughs.

“Nothing is as it seems,” she said.

“That’s the way God planned it,” Ruckus said.Â  “It forces us to give the world – and each other – a closer look-see.”

I’m thankful to the folks at Thomas Nelson for sending me a digital copy of this book in exchange for my honest opinion.Â  Without their generosity I might not have given this book a second look.