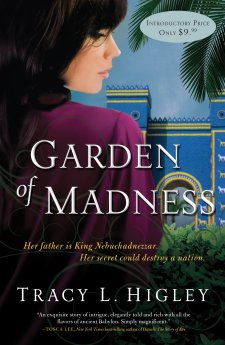 For seven years the Babylonian princess Tiamat has waited for the mad king Nebuchadnezzar to return to his family and to his kingdom. Driven from his throne to live as a beast, he prowls his luxurious Hanging Gardens, secreted away from the world.

Since her treaty marriage at a young age, Tia has lived an indulgent palace life. But when her husband dies and a nobleman is found murdered in the palace, Tia must discover who is responsible for the macabre death, even if her own new-found freedom is threatened.

As the queen plans to wed Tia to yet another prince, the powerful mage Shadir plots to expose the familyâ€™s secret and set his own man on the throne. Tia enlists the help of a reluctant Jewish captive, her late husbandâ€™s brother Pedaiah, who challenges her notions of the gods even as he opens her heart to both truth and love.

In a time when few gave their hearts to Yahweh, one woman must decide if she is willing to risk everythingâ€”her possessions, her gods, and her very lifeâ€”for the Israeliteâ€™s one God. Madness, sorcery and sinister plots mingle like an alchemistâ€™s deadly potion, and Tia must dare to risk all â€“ to save the kingdom, and to save herself.

Higley is a master at creating interesting and believable characters, setting them in historical scenes and surrounding them with mystery, intrigue and spiritual conflict.Â Â  Garden of Madness is a fascinating story andÂ  I highly recommend it.

Click on the book cover image to read more on Amazon.